Bottle gourd, also known as calabash is a tropical vine cultivated mainly for its fruits, that have a great culinary value as a vegetable in several tropical countries. The fruits and leaves of the bottle gourd are known to possess amazing nutritional and therapeutic value. It acts as an effective cardioprotective, hepatoprotective and diuretic agent. Its seeds also have a reputation as anthelminthic. 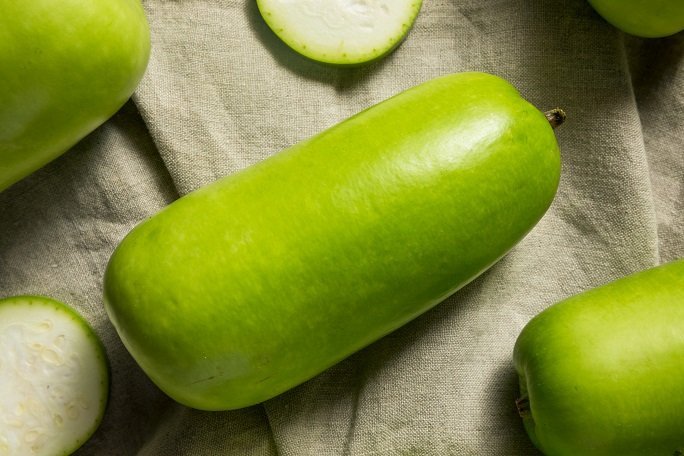 Bottle Gourd belongs to the family of Cucurbitaceae to which pumpkin and zucchini belong to.

They are tropical annual plant that requires hot climate to thrive best and get adapted to most soils.

Bottle gourd vines have a lush appearance as they bear large leaves that are about 30 centimeters broad and resembles that of pumpkin. The leaves and the stem are covered with soft hair(trichrome).

The vines are fast climbers and climb with the help of tendrils. They are characterized by large, delicate sweet-scented white flowers that open during the night.

Bottle gourds have vigorous and rapid growth and start yielding fruits normally within 50 days from the time of seeding and produce fruits for about 2 months. The fruits come in different shapes and sizes. By the time the fruits get matured the plant eventually stops its growth and dries out and often die. But you can prolong the life of the plant little more by continuous picking of young fruits.

These fruits got their name bottle gourd, as they are naturally dried on the vines in the tropical countries and are made into bottles and containers to store water or foods by removing the inner material.

There are several bottle gourd cultivars that can be characterized by their fruit size, shape, and color. There is a huge variation between the shapes and sizes of fruits depending upon the variant. They can be oblong, round, cylindrical or bottle-shaped, dark green, light green or white in color.

India has a great diversity in the bottle gourds. However, the rectangular and round shaped ones are commonly cultivated as they have a great demand as a vegetable. People prefer rectangular ones over round variety.

Bottle gourds are normally consumed as a vegetable when they are immature. The mature fruits are inedible as the rind of fruit becomes hard and woody.

Actually, bottle gourds are not a great source of nutrients.

About 95% of the gourd is made up of water and gives approximately 20 calories of energy per 100 grams.

Bottle gourd can be a potential therapeutic source for reducing diabetes. The presence of flavonoids and phenolic contents in the leaves are thought to exhibit Anti-diabetic activity.

In a study administration of the methanol extract of aerial parts of Lagenaria siceraria in a dose-dependent manner to streptozotocin-induced diabetic rats have shown a significant reduction of blood sugar levels (1).

Works as a Diuretic

Bottle gourd is well known as a diuretic since ancient times. Its white pulp of the fruits, Seeds, and bark are all known to exhibit diuretic property.

Bootle gourd seeds have been shown to have anti-helminthic activity.

Research conducted in vitro using extracts of bottle gourd seeds against Pheretima posthuma has shown that benzene and methanol extracts were highly effective in causing paralysis and even death of worms when used at high concentrations on comparison with standard drug Piperazine citrate (2).

Bottle gourd fruit is considered as a lipid-lowering agent. It is a rich source of soluble dietary fibers that are considered to lower the levels of cholesterol.

The presence of sterols, fixed oil is thought to possess lipid-lowering effect. Additionally, the secondary plant metabolites such as saponins and flavonoids are also thought to contribute for the antihyperlipidemic activity (3).

Administration of the methanol extract of bottle gourd aerial parts at a dose of 200 and 400 mg kg-1 have shown a significant inhibition of tumor cell volume, packed cell volume and viable cell count of the tumor in the mice. The extract also increased the lifespan of the mice significantly when compared with control (4).

Oral administration of soluble fractions of methanolic extracts of the fruits in rats has significantly inhibited the delayed-type hypersensitivity reactions in a dose-dependent manner. The study also said that there is a significant increase in the antibody and White blood cells count (5).

The traditional use of bottle gourd for several health ailments may be attributed for its bioactive compounds which are capable of reducing free radicals and reactive oxygen species that may cause cell damage.

It can have Hepatoprotective nature

Research conducted by administration of different fractions of ethanolic extract of bottle gourd at a dose of 250mg/Kg had shown significant protection against CCl4 induced hepatotoxicity in rats.

The hepatoprotective nature of bottle gourd is might be due to the presence of sterols like campesterol and fucosterol (7).

Giardiasis is one of the most common infectious disease caused by Giardia lamblia and is characterized by symptoms like diarrhea and abdominal pain. Bottle gourd seeds can help you in treating these parasites.

The Petroleum ether extract of bottle gourd seeds exhibited a 100% mortality rate within 72 hours against Giardia lamblia. The anti-giardial activity of the seeds might be due to the presence of triterpene (8).

It may act as Adaptogen and Anti-stress agent

Along with several health benefits one can obtain from bottle gourd, It may also act as an Adaptogen.

In an experiment conducted, administration of ethanolic extract of bottle gourd fruit to Albino Wistar rats which were subjected for different tests had shown an increase in their swimming endurance time and also exhibited a better stress tolerance. It was also observed that there is a significant decrease in the stress-induced elevated levels of cortisol and blood glucose levels (9).

Bottle gourd is considered as a great plant that has medicinal properties since ancient times. Its use as a medicine is well documented in several ancient texts of India.

Bottle gourd consumption is believed to give cooling effect to the body. The fruit and the seeds are considered to boost the quality and quantity of semen.

In folk tradition, the sap of the bottle gourd leaves is used against skin burns to get relief from the pain.

Young bottle gourds have a smooth and pale colored skin and are easy to peel and cut, while the mature ones have a strong rind that is difficult to peel.

If you are buying from a market, have a look at the stalk of the fruit whether it is dry or fresh. Also, observe the firmness and freshness of the fruit and make sure to choose one without any discoloration and cuts.

Although bottle gourds have a huge importance as a vegetable, be known that certain bottle gourds particularly if bitter can be toxic. The toxicity in the bottle gourds might be due to the presence of cucurbitacins, the compounds responsible for bitterness in the fruit (10).

Several cases were reported in India regarding bottle gourd toxicity, in which people reported nausea, vomiting, severe abdominal pain after the consumption of bottle gourd juice which tasted very bitter (11).

Even several deaths were also reported allegedly due to the consumption of bottle gourd juice (12).

So it is advised not to consume bottle gourds or its juice if bitter, as it may result in serious poisoning and even death.