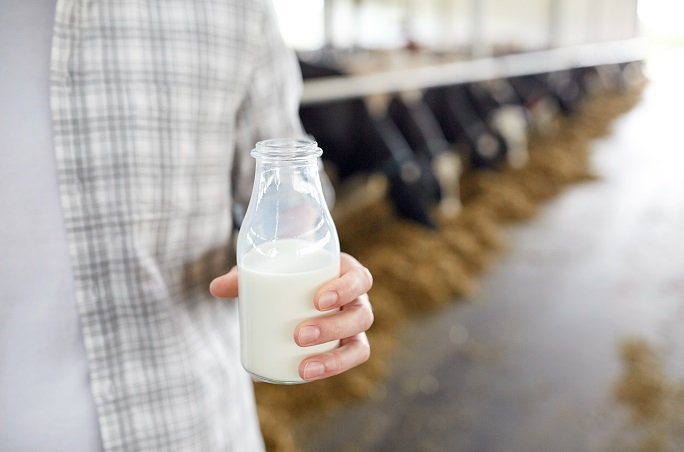 Buffaloes play a very important role in the dairy sector of India and Pakistan and are the major source of dairy in these countries. There is a growing interest in buffalo milk all over the world considering its nutritional and economic value.

Major constituents of the milk namely the fats, proteins, sugars are high in buffalo milk and it is also rich in vitamins and minerals making it a great source of nutrition.

The popularity of Buffalo cheeses is increasing day by day and the richness of the buffalo milk is making it economical and suitable for the production.

Although buffaloes seem to be ferocious, they are actually gentle and docile creatures that have a close relationship with their owners.

Cow is the most important animal in the dairy industry as 85% of the world’s milk production comes from cows.

Being a great source of nutrients, Cow milk has several health benefits and can aid in building strong bones, healthy teeth and also in boosting immunity.

Cow milk is rich in proteins, vitamins, and minerals that can help in the proper functioning of the body.

Cows are gentle animals and are the most common farm animals found all around the world. They can adapt well to a variety of climates and are also well known for their high milk production.

Color is an easy way to differentiate between cow milk and buffalo milk.

Cow milk has a characteristic pale yellow color that is due to the presence of beta-carotene which is a precursor of vitamin-A.

While the buffalo milk has a distinctive white color as the beta-carotene is absent in the buffalo milk as it gets converted into vitamin-A. The higher concentrations of caseins in the milk too play a role in its color.

The viscosity of buffalo milk is much higher than that of cow milk. This could be mainly due to the presence of higher fat content and the solids in buffalo milk.

Due to the presence of high peroxidase activity buffalo milk can be preserved for a long period of time than cow milk. The presence of several enzymes that have antimicrobial properties also contributes to this process.

Buffalo milk is loaded with calories. For every 100 grams, Buffalo milk provides approximately 100 calories while the cow milk gives about 70 calories.

The emulsifying capacity of the buffalo milk is better when compared to cow milk due to the presence of high amounts of triglycerides with butyric acid.

Which countries are the producers?

The United States of America is the top producer of cow milk in the world followed by India.

Most of the buffalo milk is produced in India, Pakistan, and China. A significant amount of buffalo milk production can be seen in Egypt, Italy, and several South Asian and Southeast Asian countries.

Considerable buffalo population is also present in Latin American countries like Brazil, Argentina, and Venezuela and some European nations like Bulgaria and Romania.

Buffalo milk is the second most produced milk after cow milk. About 85% of worlds milk production comes from cows and approximately 11% from buffaloes.

How much milk does a cow and a buffalo give?

The production of the milk actually depends upon the breed and several factors like feed and season. Top cow breeds like Holstein, Ayrshire produces approximately 30 Litres of milk per day and Indian Breeds like Gyr, Vechur, Punganuru, Hallikar yields approximately 5-10 liters per day.

Buffalo breeds like Murrah yields about 10-15 liters of milk and breeds like Nili-Ravi, Sruti yields approximately 5-10 liters per day.

Both cow milk and buffalo milk have similar health benefits. The presence of higher amounts of calcium in buffalo milk can be beneficial for building healthy bones and especially in conditions like osteoporosis.

The presence of immunoglobulins both in the cow milk and buffalo milk can help you to boost your immunity.

Buffalo milk is rich in several compounds like lysozymes, peroxidase which has a protective nature.

In general, milk from most buffalo breeds is similar in its composition and also contains high amounts of most of the constituents like fat, proteins, minerals than cow milk (2).

But, be known that the feed, season, stage of lactation, time and several other factors influence the composition of milk in both cows and buffaloes.

Fats present in the buffalo milk are responsible for making it energy-rich source.

Both the total and free cholesterol levels in the buffalo milk are lower than cow milk.

The tocopherol content(Vitamin-E) in the buffalo milk is slightly higher than cow milk.

Buffalo milk is also rich in minerals like magnesium, phosphorous and also have considerable amounts of iron, copper, manganese, and zinc.

Cow milk is rich in carotenoids from which the characteristic yellow color comes from. Whereas buffalo milk lacks the carotenoids.

But on souring Biliverdin disassociates and converts into a yellow pigment bilirubin-IX alpha and this is the reason why we get the slightly yellowish color to the ghee when prepared traditionally.

Lactose is a good source of energy for body activities mainly for the brain and hormonal regulation.

IgG is the major class of immunoglobulin present in both cow milk and buffalo milk.

Several enzymes have been identified and isolated from both buffalo milk and cow milk.

The activity of enzymes like alkaline phosphatase, Lipase is less in buffalo milk than cow milk.

Lysozyme which is an important enzyme for antibacterial activity in the milk has high activity in buffalo milk compared to cow milk (6).

Lactoperoxidase, another enzyme which is well known for its antimicrobial activity is one of the major enzymes found in the buffalo milk.

Most buffalo breeds that you find in India, Nepal, and Pakistan are river buffaloes.

The gentle and the docile nature of buffaloes made them close to the owners. Buffaloes won’t trouble much, understands most of the words and follows the commands of their owners.

The taste, thickness and the creaminess of the milk are one of the main factors that made people prefer buffalo milk over cow milk.

Due to the presence of high amounts of fat, the butter and the ghee produced from the buffalo milk is much higher than cow milk. which made buffalo milk economically profitable while satisfying the needs of a home.

Buffalo milk has a high economic value in the terms of production. For example, if a cheesemaker requires about 8kgs of cow milk to produce 1 kg of cheese. 5 kgs of buffalo milk is enough in the same case.

Even the maintenance of buffaloes also played a role. It is easy to maintain buffaloes than cows as they have a very little amount of hair with no oil glands or sweat glands on the body.

Buffaloes have higher digestibility and don’t have a particular interest in their feed and get adjusted with paddy and wheat straws which are easily affordable.

Another important factor that contributed to the growth of buffalo farms is the shelf life of the milk.

The high value and demand for buffalo milk made them a major source of dairy in India and Pakistan.

Finally, which milk is better for you?

Both the buffalo milk and cow milk are beneficial in their own ways considering their health aspects and the nutrition profile.

However, If you are in a diet plan to put down some weight just go for cow milk and if you wish to gain some weight, buffalo milk suits you the best.

Buffalo milk can be a great alternative for the people who suffer from cow milk allergy (7).