Baheda (Terminalia bellirica) also known as Bibhitaki or Bahera is a large tree that can be found across the deciduous forests of South and Southeast Asia. It can also be seen in the plains of Asia here and there mostly as a single tree, planted on the border of farms.

The tree has huge importance in traditional systems of medicine like Ayurveda, Unani and Chinese medicine considering its properties to cure several health problems. Beheda fruit is also very popular in India as it constitutes a popular Ayurvedic medicine Triphala. 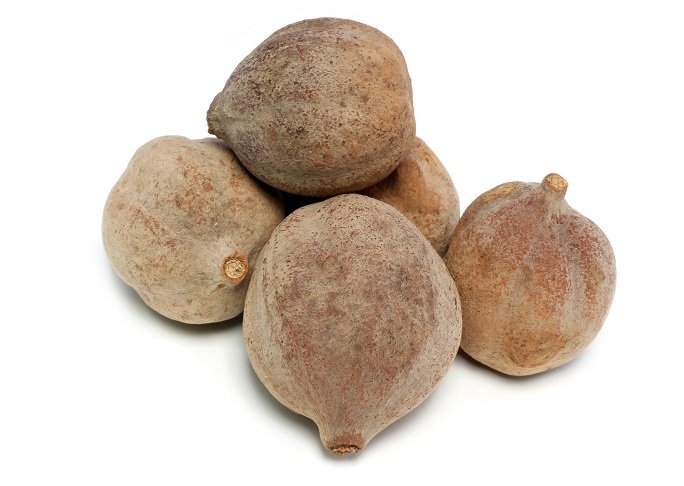 Beheda is a large deciduous tree native to South Asia and can grow up to a height of 50 meters. It has thick, brown-grey colored bark with deep longitudinal grooves. Leaves are smooth, oval-shaped and come in clusters at the tip of the branches.

These trees require direct sunlight for healthy growth. Flowering normally occurs in the summer season and flowers are small, pale greenish yellow colored and have a strong offensive odor. Pollination occurs by insects which are attracted by the odor.

Several phytoconstituents had been isolated from different parts of the plant like alkaloids, flavones, coumarins, lignans, steroids, saponins, and terpenoids.

Fruits mature in winter season and measures about 2-4 centimeters long. They are oval-shaped and contains an oily kernel. These fruits are dried and used as a medicine.

Bibhitaki is a wonderful herb that can be effective against stomach ulcers.

Several studies conducted to know the antiulcer activity of Bibhitaki had shown that the fruit has amazing anti-ulcer properties and also said that this might be due to the presence of compounds like Gallic acid and Ellagic acid in the fruit (1, 2).

Depression is a mood disorder that can seriously affect our health. Although there are several drugs available for the treatment, they may have their own side effects. So it is better to look at the healthier alternatives like plant products.

Bhibhitaki is an excellent plant that may help you. Several studies conducted had proven that the aqueous and ethanolic extracts of Baheda fruit have shown an antidepressant-like effect when tested on mice (3).

It can give relief from respiratory and gastrointestinal problems

Baheda was used in traditional medicine for the treatment of respiratory problems like asthma and several digestive problems since ancient times.

It may prevent metabolic syndrome

Metabolic syndrome is a condition characterized by increased blood pressure, obesity and blood sugar levels leading to the risk of heart diseases and diabetes.

Research conducted had said that Baheda has amazing medicinal properties and can be helpful in preventing metabolic syndrome. Hot water extract of Baheda tested on spontaneously obese type 2 diabetes mice had shown a preventive effect on obesity, hyperlipidemia and insulin resistance (5).

It can keep our liver healthy

Oral administration of Baheda extract had shown positive effects on the liver by reducing the liver iron, lipid peroxidation, protein oxidation, liver fibrosis, serum enzymes, and ferritin in a dose dependent manner on the tested mice (7).

Invitro study conducted to know the effect of Baheda extract on mouse immune system had shown that the extract (500 µg/ml) had stimulated the macrophage phagocytosis (8).

The fruit of Terminalia bellirica was revered for its numerous health benefits and one of the most significant was its ability to reduce serum glucose levels in the body.

The methanolic dried fruit extract of Baheda at a dose of 100mg/kg body weight had significantly reduced serum glucose levels in hyperglycemic animals. The extract had also exhibited Anti-oxidant activity by preventing excessive free radical formation in the treated animals (9).

The fruit extracts of Bibhitaki have a protective nature in preventing diabetes mellitus and its complications. The extracts had increased plasma insulin, c-peptide, glucose tolerance levels and restored other parameters related to diabetes mellitus in the experimental animals (10).

Research conducted to know the anticancer activity of Triphala had shown that the extract of this formulation had exhibited significant cytotoxicity on the tested cancer cell lines.

Interestingly the extract had exhibited a differential effect on noncancer and cancer cell lines. Treatment on normal cells with Triphala did not affect the cells significantly (11).

As a hair tonic

In Ayurveda, oil extracted from the seeds of Bibhitaki is used as a hair tonic to promote hair growth and even used for premature hair greying.

It has Wound healing nature

Bhibhitaki is well known for its wound healing properties. Tribal people in some regions of India use it as a folk medicine to heal external wounds or skin infections.

The ethanol fruit extract has a significant wound healing activity. When this extract is applied as an ointment on experimental animals, it has exhibited a significant wound contraction and closure ability along with increased tensile strength of the wound.

The study had also shown that Bibhitaki extract contains 20-40% tannins that play an essential role in the healing of wounds by different mechanisms (12).

In folk medicine, Baheda is used as a popular remedy for treating infections. Several studies had also shown that it has a potential Anti-microbial activity that can significantly inhibit some of the harmful microorganisms (13).

The antimicrobial activity of the Baheda fruit is might be due to the presence of secondary metabolites like phenols, alkaloids, flavonoids, and other compounds (14).

The stem and leaf extracts of this plant are also known to exhibit anti-microbial activity against Gram negative bacteria (15).

Baheda can be an alternative herbal medicine that can help you in reducing fever and its complications and also have promising antipyretic properties.

In one experiment, Baheda was able to reduce elevated body temperatures and also significantly decreased the writhes (16).

Baheda has always been valued as herbal medicine and is reported to possess excellent Antioxidant properties.

In vitro assays carried out on the Bibhitaki fruit had exhibited free radical scavenging activity and inhibited β-carotene destruction. It has been reported that the antioxidant property of the fruit is might be due to the presence of potential phenolic compounds (17).

The fruit of bhibhitaki is classified as an Anti-helminthic in Ayurveda medicine. It was also thought to expel
parasitic worms that especially cause digestive disorders.

The fruit pulp extracts of Bibhitaki had exhibited paralysis effect in worms. At higher concentrations, the extract was also able to cause the death of the worms (18).

Baheda fruit is mostly used in its powdered form and can be consumed by mixing with water or honey.

You can purchase Baheda fruit powder from an Ayurvedic store or Online.

Side effects and Toxicity

Terminalia bellirica fruit powder is possibly safe to use for most people. However, consult an ayurvedic physician or your doctor before use.

To be on a safe side, It is better to avoid the use of Bibhitaki during pregnancy, breastfeeding and even 3-4 weeks before a scheduled surgery.

Snake fruit or Salak: A Delicious Fruit with Amazing Benefits