Solanum trilobatum is an amazing plant that has been used as a medicine since ancient times. It is a popular medicinal plant both in the Ayurveda and Siddha system of healing.

This plant is commonly found in the southern region of India along with some other countries like Srilanka, Thailand, and Vietnam. Although this plant is found across all the southern states of India, it is extensively used in the state of Tamilnadu. Where it is called as Thuthuvalai.

This plant is used as a leafy vegetable for the preparation of chutneys, curries, and rasam considering its numerous health benefits. 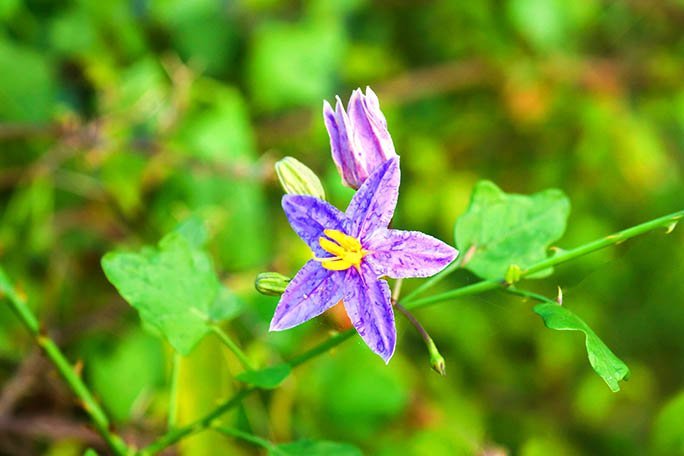 Solanum trilobatum is a perennial herb that grows up to a height of 2-3 meters and is fully covered with thorns. One can see thorns even underneath the leaves and sometimes on the stalks of the fruit. The plant produces attractive purple-violet colored flowers.

Leaves are triangular and are irregularly lobed. Fruits are small, globose and contains numerous tiny seeds. They come in light green color and turn red when ripe.

All parts of the plant are considered to have medicinal properties and are traditionally used for treating several problems like cough, asthma, fatigue, respiratory illness, and skin diseases.

Studies suggest that the leaf and the root extracts of Solanum trilobatum have significant anti-inflammatory activity on both acute and chronic inflammation.

The root of the plant also possess excellent anti-inflammatory properties and the efficiency of the root extract is also comparable with that of standard drugs Indomethacin and Dexamethasone (3).

It has Pain Relieving Properties

In an experiment conducted to know the antinociceptive activity (Blocking pain detection by neurons) of Solanum trilobatum, root extracts are tested in experimental mice using different pain models. The results showed that the crude alkaloid fractions of the root exhibited antinociceptive properties in all the models tested (4).

In another experiment, Solasodine a steroidal alkaloid extracted from this herb also exhibited antinociceptive properties in a dose-dependent manner (5).

It may treat Bronchial Asthma

Since ancient times, Thuthuvalai is extensively used as a remedy for the treatment of various respiratory diseases.

Research conducted to know the clinical efficacy and safety of Solanum trilobatum and another herb Solanum xanthocarpum in treating bronchial asthma had revealed that either of the herbs are effective in improving several parameters of pulmonary functions in asthmatic subjects.

However, the study also said that the effect of the plants is less in comparison with the standard drugs Deriphylline and Salbutamol. No untoward effects were also reported during the study (6).

It may protect against Neurotoxicity

Lead and other heavy metal toxicity are of great concern these days. Like several lead compounds, lead acetate is very harmful as it can affect several body systems and can cause serious neurological and autoimmune disorders (7).

Solanum trilobatum is well known for its protective effects against several toxicities. A study conducted to know the effect of this plant on lead acetate induced neurotoxicity had shown that the aqueous extracts of the leaves had exhibited cytoprotective nature on brain tissue (8).

Prolonged treatment of these extracts had shown a significant reduction of blood glucose levels, urea protein and cholesterol levels in the diabetic rats (9).

It may protect your Liver Health

In Siddha system of medicine, Thuthuvalai is used as a medicine to treat liver diseases.

S.trilobatum extract tested on rats subjected to ccl4 induced hepatic damage had proven that the extract has enhanced the recovery by its liver protecting properties and antioxidant activity (10).

It has Anti-microbial Properties

Since ancient times Solanum trilobatum has been used as a medicinal herb. Especially in rural parts of Southern India, and is still valued as a potent antimicrobial source for various infections.

In one research it was revealed that aqueous methanol and n-butanol extracts obtained from aerial parts of the plant were known to possess anti-microbial property. These extracts were effective against both Gram-positive and Gram-negative bacteria (11).

Another research indicates that tannins isolated from Solanum trilobatum leaf possess anti-bacterial property. These tannins were able to inhibit some of the pathogenic bacteria tested. The antibacterial property of the tannins was also compared with the antibiotic Streptomycin (12).

A study undertaken to know the antihyperlipidemic activity of S.trilobatum had shown that the administration of leaf extract on streptozotocin induced diabetic rats for 21 days led to a significant reduction in serum triglycerides, cholesterol, free fatty acids, and phospholipids (13).

In a study, it was revealed that saponins isolated from the leaf extract hold anticancer properties. These saponins were able to inhibit human larynx carcinoma cell lines through induction of apoptosis, reduced glutathione expression and production of free radicals. The study also suggests that s.trilobatum saponin can be a potential drug for cancer therapy (14).

It has Larvicidal and Skin Repellent Properties

Solanum trilobatum leaf extracts can be an ideal eco-friendly approach for controlling mosquitoes.

Leaf extracts of this plant had exhibited potential larvicidal and pupicidal activity against Aedes aegypti, Culex quinquefasciatus and Anopheles stephensi that can carry dangerous diseases like Dengue and Malaria (16). 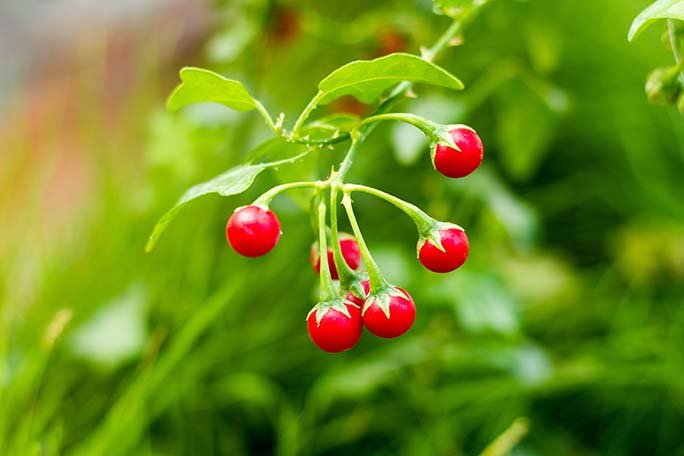 Ayurvedic and Siddha practitioners had used this herb for prevention and also for treating several health ailments. Solanum trilobatum also has huge importance as medicine across several ethnic groups in India (18,19).

Fruits of this plant are used for treating cough, hiccups, and fatigue. It is also used for improving the quality of semen.

Tender leaves of this plant are considered as a remedy for cough, intestinal worms and are even believed to improve memory.

Solanum trilobatum or thuthuvalai is used as a leafy vegetable in some regions of South India, where people prepare curries and chutneys using these leaves.

One can also avail the benefits of this herb even in its powdered form. Which are available online.

Take care while plucking the Thuthuvalai leaves or fruits, as the plant is fully covered with thorns.

Also, please be careful while preparing recipes or remedies using the leaves of this plant and avoid using the thorn areas if at all present.

As per Ayurveda consuming Thuthuvalai may cause an increase in body heat and thirsty.

Solanum trilobatum is commonly referred as climbing brinjal in English.

It has also got several regional names across India where it is called as Thoothuvlai or Thuthuvalai in Tamil, Alarkapatram, and Uchinta in Telugu.